Hello once again everyone, and may your Winter Veil be replete with gifts from Greatfather Winter and delectable Smokywood Pastures delights. I’m your narrator, Smokywood’s own Guchie Jinglepocket, and it’s been a real pleasure for you to have me tell you the tale of Forsaken financier Ebonizer Scrounge.

Now that the last of our three spirits has paid Scrounge a visit, it’s time to see if he’s had a change of heart, learned a lesson, or shows signs of increased brand affinity for Smokywood Pastures products.

Scrounge was still slightly dizzy, as one typically is after being forcefully shifted through space and time. The world was no longer wibbly-wobbly, but he definitely was. He sat hard on the corner of his bed and stared at his once pristine piles of glittering gold, now scattered across his bed and floor.

“Well, that trip was a waste of time,” he said to himself.

The clock in his bedroom began to chime four in the morning. Way too early for him to be up and about—not because he was losing any sleep; it was simply a matter of principal. Proper financiers don’t go haring about at all hours of the night. It simply isn’t done.

But then again, Smokywood Pastures is open for business 24 hours a day. Surely he could get this whole rotting business done with and move on with his life. He was certain there was a moral to be learned from what the spirits had shown him, but aside from some marketing ploy by Smokywood Pastures and some bird called Pepe, he wasn’t sure what it could be. So he sat and thought.

At last, an itch of an idea crawled through his brain. At least, he thought it was an idea. He had been dewormed not that long ago, so it couldn’t be that again so soon.

“Alright! You win!” he shouted into the air.

We at Smokywood Pastures are pretty sure he meant us, but we didn’t want to get ahead of ourselves. We’re still paying out legal fees related to the last time we presumed.

Scrounge hurried to his window and pushed against it hard, trying to dislodge years of rust. The hinges groaned against his efforts—or was that noise coming from him? It’s hard to tell when one is undead. 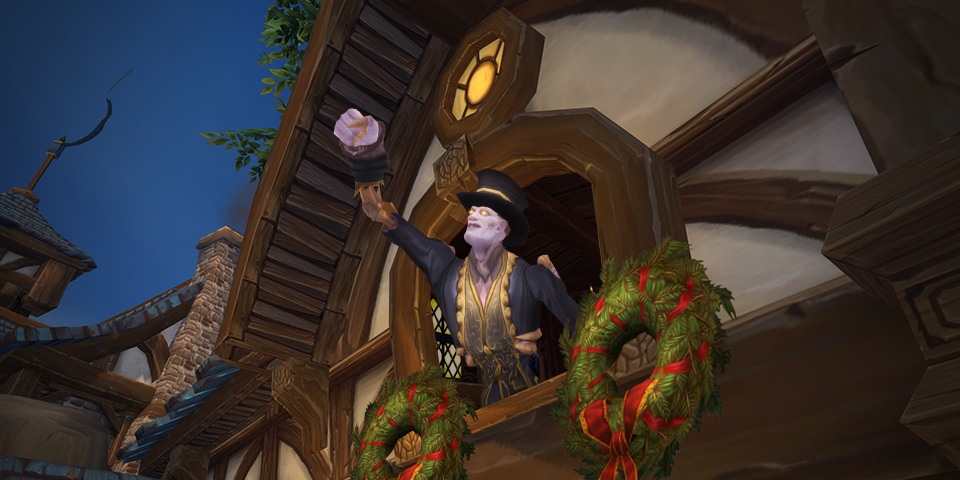 The windows flew open with a crash, and he began to scan the streets for a likely victim.

“You there!” he called to a draenei standing near a mailbox. “Hellooooo,” he called again, but there was no response. The fellow seemed to be just staring into nothing. Odd.

He spotted gnome nearby and yelled for him instead. “Hey you!”

“Who you calling ‘Hey you!’?” the very put-out gnome replied. “You can’t just go around calling people ‘Hey you!’ and get away with it.”

“You could call me Wembly, you know.”

“I didn’t know you were called Wembly,” answered Scrounge.

“Well, now you do. Is there something I can do for you?” the gnome asked him.

“Yes. Yes, I believe you can. I’ve had a very bad night with some commercial spirits.”

Speaking of commercials—we have one last sponsored message for you, just in time to help you haul home all those wonderful presents! 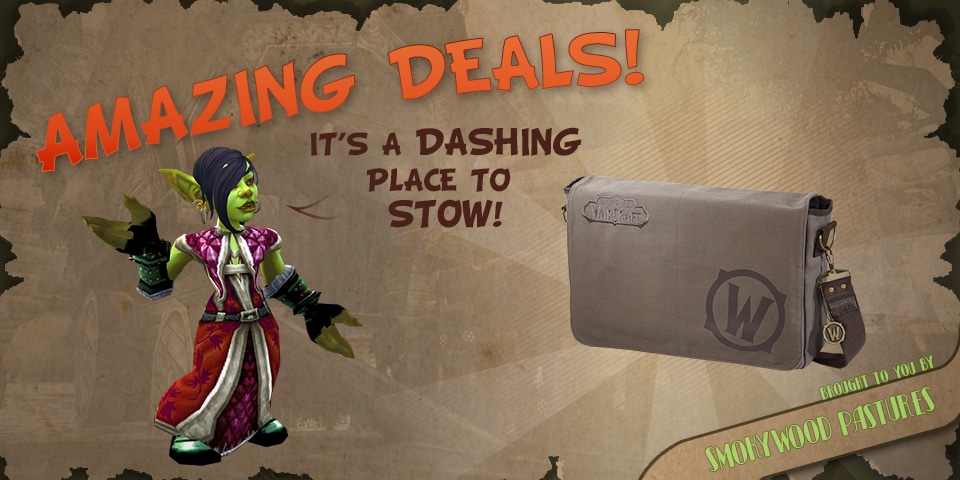 Need something to put other somethings in? Behold the mighty messenger bag! It holds both large AND small rocks, paper, and stuff in general. Yes, it’s a great stuff holder and carrier. It even has a strap so you can have someone carry it for you! Don’t delay—get this great stuff holder for your Winter Veil haul now!

“Oh, yes sir, I know the type,” said the gnome. “Advertising apparitions got my uncle Willemm last year ’round this time. Those Smokywood Pastures types are persistent aren’t they?”

“Yes,” said Scrounge. “Yes, they are. So look, I really don’t want to have to do anything myself and really just want to get this over with. Might I give you some gold and you can go buy everything from their catalog—twice? No, wait . . . make that 12 times over. You’ll need to deliver one portion to my nephew and another to Bob Bigheart.”

“Oh yes, I know that one,” replied the gnome. “Dwarf what adopted an ogre. I expect it’ll eat him someday.”

“Yes, well I’m trying to avoid that,” grumbled Scrounge as he tossed a large sack of gold down to the gnome, who caught it with his cranium. He went down briefly, but gnomes are hard-headed creatures, and he was back up in a flash.

“Take some of the cheese and sausage and whatnot home to the family, and the rest just give to whoever you wish,” said Scrounge. “Just make sure you sign them up for a Smokywood Pastures catalog. I really don’t want to have to go through this nonsense again next year.”

“Er . . . I’m not entirely sure what to say,” the gnome replied, his heart filled simultaneously with mild gratitude and the urge to hurl a fruitcake at Scrounge’s rotten head.

“Yes yes, happy Winter Veil to you, too,” Scrounge said. And as he shut the window, he swore he heard the sound of carolers singing a soon-to-be-classic holiday jingle. “Buy so-o-o-ome,” their angelic voices proclaimed. “Ooooooor eeellllllse!”

Our tale has ended, and thankfully our message reached Scrounge in the end despite last-minute marketing-budget cuts. After further negotiations, along with a legally binding contract with Smokywood Pastures for 12 full catalog purchases each year, I’m happy to say that Ebonizer Scrounge is a changed Forsaken. No more will he hoard all of the delicious Graccu’s Mincemeat Fruitcake for himself. Instead he will share it with those less fortunate . . . or face the consequences.

We hope you’ve enjoyed our tale, and we hope even more that you’ve come to truly appreciate the delights of Smokywood Pastures. Don’t forget that Greatfather Winter has left presents under the trees around Azeroth, so go get yours now—and may the rest of your Winter Veil be a profitable one. 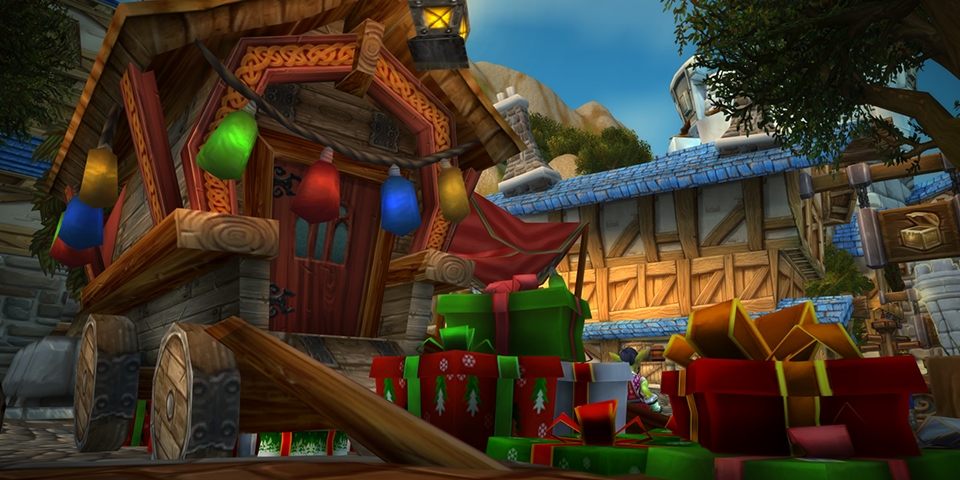