The undead financier Scrounge stared at the clock on the wall. Each tick sounded louder than the clink clink clink of his gold. It rankled him, as he had yet to understand how much he could give to the world of Azeroth – particularly Smokywood Pastures. We at Smokywood Pastures were determined to get through to him, and we were sure the second spirit would be our big ticket.

Light burst around Scrounge and pushed the curtains surrounding his bed aside. The sound of a thousand Winter Veils assaulted his ears and a merry voice called to him. He was not at all happy about it, really, as he took in the sight before him: Greatfather Winter positively glowing with spirit. Scrounge flinched and tried to draw further away but found he couldn’t move.

“Are you the spirit of Winter Veil present then?”

“C’mon then!” the spirit boomed as he waved Scrounge over. “We haven’t all night! We have things to do, people to see, Smokywood Pastures delights to… erm, delight in!” Once more, Greatfather laughed, a painfully jolly cacophony that made Scrounge cringe.

Next thing Scrounge knew he was standing at his nephew Ted’s Winter Veil Party, the sight of which was sad enough to even touch Scrounge’s shriveled heart. Upon the table, there was but one lone Smokywood Pastures Honeyed Holiday Ham (although it looked like Ted had the good sense to pick up some Steamwheedle Fizzy Spirits too). Ted’s family seemed to be laughing and playing some game or other – most assuredly to distract them from how many of Smokywood Pastures’ holiday delights they were missing. 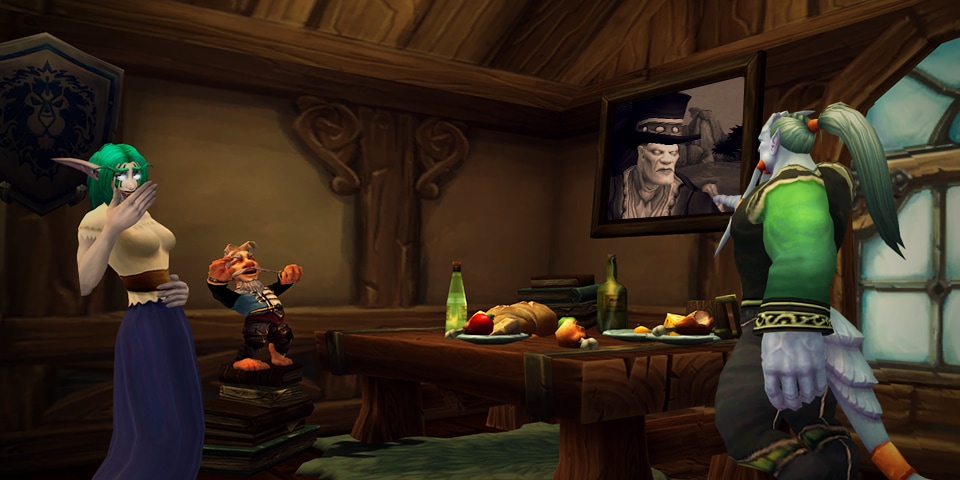 Greatfather Winter gestured to Scrounge and said, “Let’s get closer, shall we?”

Scrounge felt a pull and, within a blink, stood within his nephew’s home. The laughing and joyous sounds made him clamp his hands over his ears.

“Spirit, why must I be made to suffer so? This is no party. There’s no Graccu’s Homemade Meat Pies or Spicy Beefstick.”

Scrounge narrowed his eyes at Greatfather Winter. “There isn’t even any of your Greatfather’s Winter Ale. How can you abide by it?”

Greatfather Winter flushed slightly with anger as he bore down on Scrounge. “Yes, this party has an inexcusable lack of Smokywood Pastures’ unmistakable brand of holiday cheer… Something YOU could easily remedy, I dare say. Have you not enough gold in your coffers?”

Scrounge scowled and crossed his arms over his chest.

He started to speak again but Scrounge felt the now familiar jolt of being relocated again. As the sort who rarely used portals (Scrounge always found the idea of tipping a helpful Mage for their troubles offensive), his constitution could hardly tolerate all of this teleporting around. While he’s getting his feet again, let’s check out another word from our sponsor! 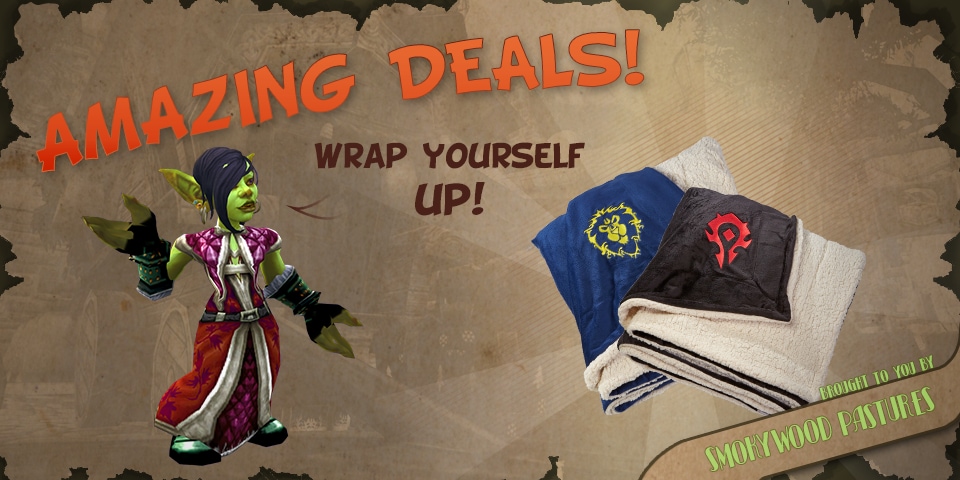 Brrr… it’s cold out there, but you can get cozy while showing your loyalty to either the Horde or Alliance. They can also be used for tent forts, blocking out scary sights, picnics, and so much more! Get yours today!

Scrounge found himself in front of the window of a small home. A gesture from Greatfather Winter indicated he should get a little closer and so, reluctantly, he did. To what did his wondering eyes should appear? Bob Bigheart and probably the biggest ogre he’d ever seen.

“Spirit, why is my employee spending his evening with an ogre?”

“That’s his adopted son, Not So Tiny Tom. He’s a bit of a mouth to feed and you barely give him enough to stay warm at the office.”

“Nonsense. My office operates at well over the legal minimum temperature. That’s hardly your business anyway, isn’t it?”

Greatfather Winter pushed on Scrounge forcing him to look closer into Bob’s humble hovel. The sight that lay before him was far worse than Scrounge had anticipated. There was not ONE scrap, one tiny crumb, not one whiff of any of Smokywood Pastures fine products. 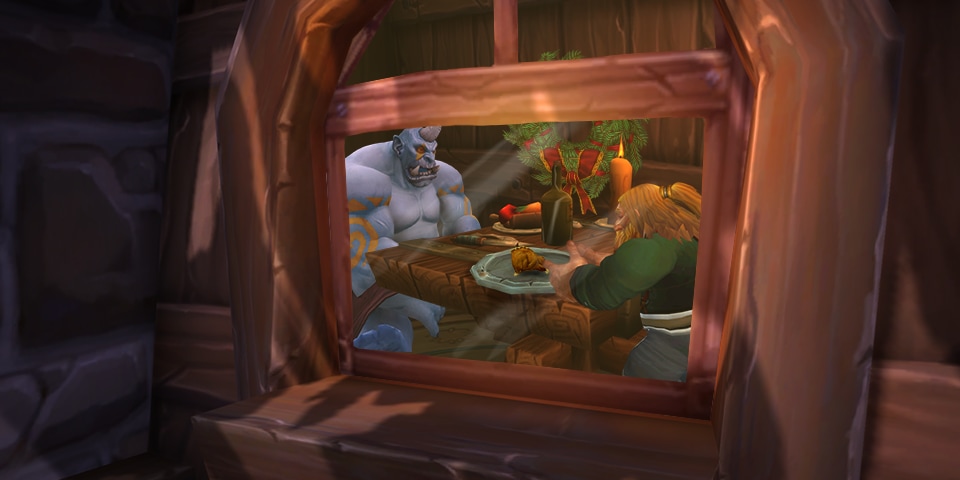 “This is your fault, you know. If you paid him more, he could afford to buy from the catalog of fine Smokywood Pastures delights. We all suffer for this. Without more gold to sustain the market, Smokywood Pastures can’t expand their offerings. We – I mean they can barely even maintain their current catalog!”

Scrounge scowled once more, stirring up a glimmer of hope in this narrator’s gold infused heart. It seemed he was almost starting to see the error of his ways and then… the glimmer died.

“Have it your way,” Greatfather Winter said patting him a bit roughly on the back. “I hope you’re able to find a new employee easily.”

He turned away as if to leave Scrounge behind.

“Wait!” Scrounge called. “What do you mean, ‘find a new employee?’ This one’s so well worn in! Why would I want a new one?”

“Isn’t it obvious? If Not So Tiny Tom doesn’t get enough to eat, he’ll be eating Bob before the year is out. You’ll have to hire someone new, at the latest minimum wage.”

Scrounge trembled. Recent regulations had increased the minimum wage by nearly half a percent – practically robbery! (Smokywood Pastures would like to assure our readers that all of our employees are paid a fair living wage for their services).

“Is there nothing that can be done to prevent that horrible eventuality?”

“Of course, Scrounge. You have but to feed the beast. Might I recommend buying the entire Smokywood Pastures catalog, oh, let’s say… ten times over? That should hold him until next Winter Veil, when Smokywood Pastures will return once more with their amazingly scrumptious temptations and delicacies.”

Scrounge scowled once more and turned to look back at Bob’s house again. Before he could, however, he felt the gut-wrenching sensation of transporting once more, and then promptly found himself falling out of his bed.

Scrounge had but one more Spirit to visit with before he would be free of these vexations. He still didn’t quite understand the amazing opportunity being given to him. We at Smokywood Pastures pride ourselves on top customer service. In fact, the Spirit Package is the finest we offer!

Is there hope for Ebonizer Scrounge yet? We’ll learn more when we return with Part 4 of A Winter Carol on Wednesday, December 23.