Guchie Jinglepocket from Smokywood Pastures here again to continue our tale! As you may remember, we last left Ebonizer Scrounge after he had just been visited by the spectre of his old business partner, Yardley. He wasn’t very happy that Scrounge wasn’t doing his utmost to spread the Smokywood Pastures goodness. How else are we to increase our year-over-year profit margins if people don’t do their part?

Scrounge sat in his bed wondering if he had just imagined the entire Yardley conversation or if he really was about to have to entertain more ghostly guests. Three more, even! He wasn’t really feeling up to it, to be honest, and was pretty vexed that he wouldn’t be able to count his gold all night in peace as he normally did.

The clock in his room began to chime one in the morning, its bell a resounding reminder of Yardley’s warning. Scrounge hoped the first spirit was on time so they could fit in a visit to the Smokywood Pastures vendor before the next spirit arrived.

A light began to seep through the heavy curtains that surrounded his bed. He didn’t really need the comfort of either the bed or the curtains. He probably didn’t need a solid gold samophlange either, but that didn’t stop him from enjoying it.

He pulled the curtains aside and looked around the room, not seeing anything of note—then he heard a giggle from closer to the floor. A small blonde gnome with her hair in buns stared back at him, her hands folded nicely in front of her as she peered up at the Forsaken financier.

“Hello!” the gnome said. She looked vaguely familiar, but Scrounge didn’t want to presume. Frankly, all gnomes look alike to him anyway, but he dared not say such things aloud. Not since the last time, anyway.

Scrounge stared at her as she babbled about time vortexes, temporal anomalies, juxtaposomethings, and a pair of ducks—unable to make heads or tails about what she was talking about. Eventually, growing weary of her ramblings, Scrounge interrupted.

“So are you the Spirit of Winter Veil past I was told of or not?”

“How can you be anything but late for the past?”

“Oh that’s right, you wouldn’t understand,” she said, grabbing him by his tunic as the world started to get all wibbly-wobbly. 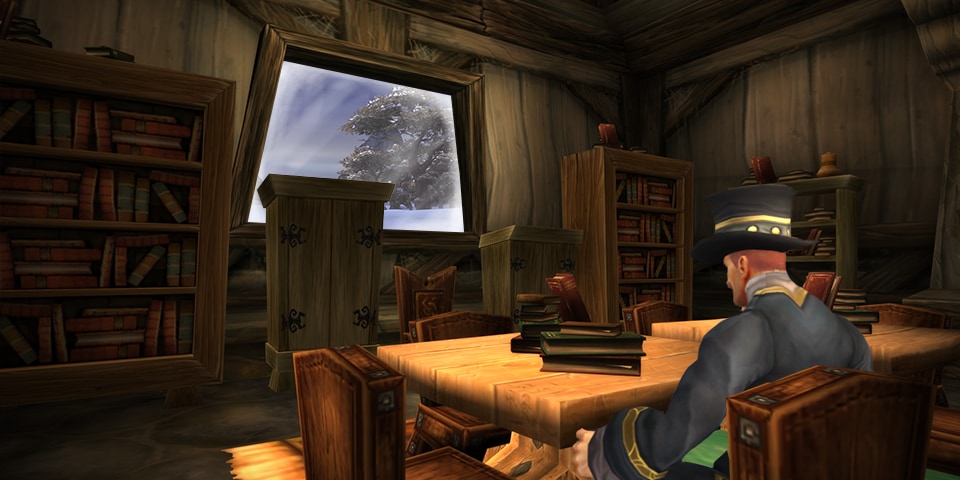 Suddenly, they stood outside a small schoolhouse. Scrounge instantly recognized it as the place where he first learned of the wonderful power of numbers, during a time of his life marked by both great promise and sadness. You see, there was no Smokywood Pastures yet. No Smokywood Pastures Gift Packs, no Holiday Cheesewheel—oh, it was a dark time. But there were numbers—lovely, lovely numbers, and the promises they held.

“I remember this,” said Scrounge. “I was a boy here. I remember hours of wonderful arithmetic while the other children went home for Winter Veil.”

“You remember this? Oh, thank goodness—got lucky there! But yes, it’s true . . . you never really got along with your classmates while you were here. Your only friend was an adding machine.”

“Those were good times, aye.”

“But you didn’t have any money.”

“Well . . . yes, I suppose that part was pretty terrible.” Scrounge replied gruffly. “Is there a point in showing me this, spirit?”

“Oh no, not really. I honestly wasn’t sure where we’d end up, so I’m glad it happened to be a moment you recognized. Let’s go sometime else!”

Chromie grabbed him once more, pulling him down to face her. She looked momentarily confused, and once more Scrounge felt the world shift around him. 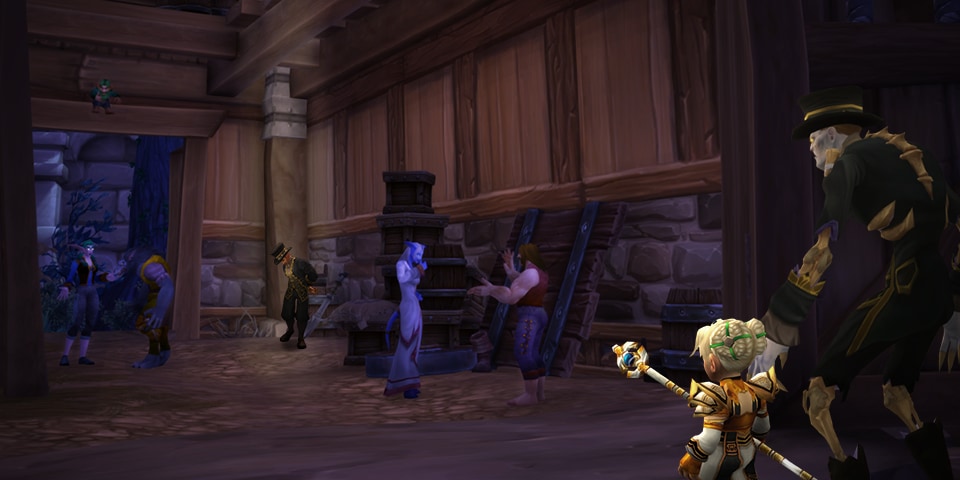 The scene was another Winter Veil celebration, and the sound of music permeated the air. Scrounge soon realized this was his worgen boss Fuzzywick’s party, and there was a boundless amount of Smokywood Pastures goodies for all to partake in. It was a comestible festival, which I’m told means “a pretty awesome party.” A feast for the eyes and ears, and everyone was happy . . . save for Scrounge.

“Spirit, why do you torment me with such visions?”

“Why show me this party and this time in my past? What lesson can be found here?” he lamented.

“Oh, right. The past . . . I thought I had returned you to the present. Your present, not my present. Light, that would be weird if I took you to my present, wouldn’t it?”

Chromie immediately launched into yet another extremely boring explanation of time and space—which we’ll spare you from by breaking for this amazing offer from Smokywood Pastures’ sponsors! 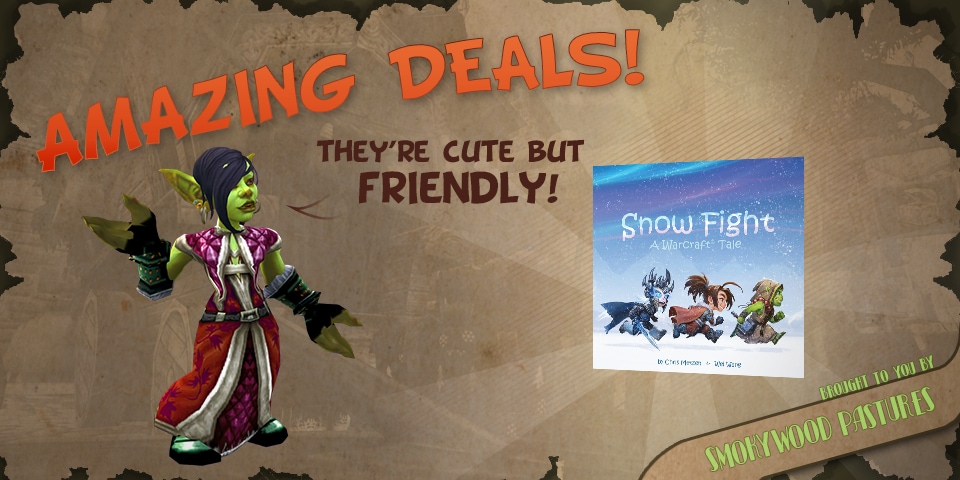 If you can’t relive your childhood by going into the past with a time-traveling dragon, fret not! Smokywood Pastures has you covered. Pick up the delightful book Snow Fight and you can relive someone else’s childhood. Buy one for everyone on your Winter Veil list—they’ll thank you for it!

Now back to our irregularly scheduled Chromie. . . .

Scrounge looked unconvinced as she once more lurched at him to grab his tunic. The next moment he found himself back in bed, his gold coins knocked askew from their neat stacks. The last sound he heard was Chromie’s giggle drifting away into the chilly night air. He hoped she remembered to bring him back to the present. He checked his clock to be sure. It was half past one, so she had been off by just a hair. He was lucky that was all she was off by.

Scrounge would have sighed if he were able to, but instead he began counting his coins. He knew he had two spirits to go before he’d get release from these pesky ghosts. Couldn’t they see he had better things to do?

It was a sad state to be in. Yes, Scrounge was an exceedingly greedy fellow, preferring to hoard his gold instead of reinvesting it into the ongoing growth of Smokywood Pastures, helping it grow into the biggest name in the commercial foods and beverages world. Sad, sad indeed.

We’ll continue Ebonizer Scrounge’s education when we return with Part 3 of A Winter Veil Carol on Monday, December 21.