Yardley was dead, to begin with. There was no doubt about that. Killed by an adventurer looking to add to their gold stash, his pockets picked clean. Not even a scrap of linen remained.

This all played out well enough for Scrounge, who got all of Yardley's stuff—including his business, a couple of mounts, everything in his bank, and a few pets that Scrounge promptly sold on the Auction House. Scrounge may have been the sole griever at Yardley's gravesite, but he was mourning the loss of a dependable business partner more than a friend.

This brings us back to the assuredness of Yardley's demise—his death was as certain as taxes. I say this because, as you're well aware, death in Azeroth is sometimes just ... merely a setback.

Scrounge never changed the sign above the door that bore his and Yardley's name. That old copper-pincher just didn't want to pay the local goblin artisans to do it. Oh, but he was a tight-fisted, foul-breathed, rotting mass of flesh. An ideal to aspire to, really—minus the rotting flesh and halitosis, of course. 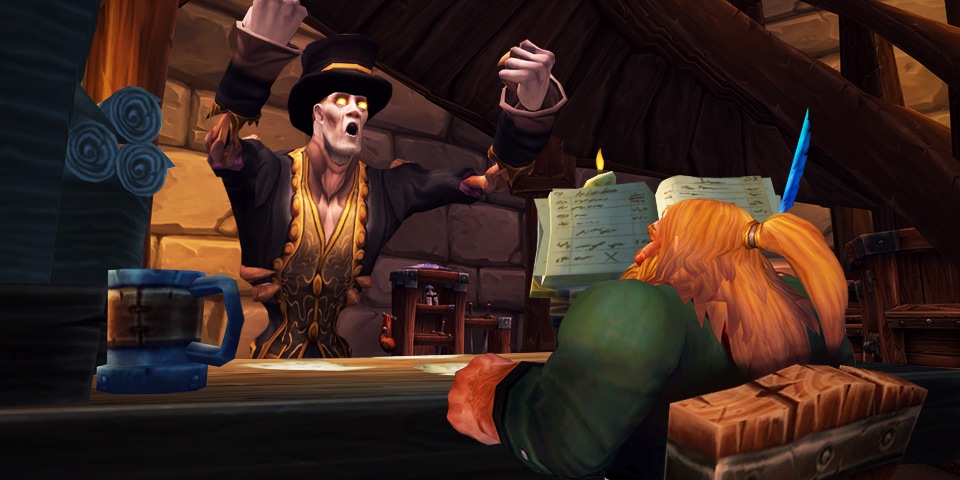 Scrounge had a lone scribe working for him at his counting house: Bob Bigheart, a dwarf who could spell his name both forward and backward (well, his first name at least). Which is great, because people like that save you money on nametags, unlike the boneheaded brother-in-law you put in charge of engravings who misspells an entire order of twelve dozen... right, the story.

Bob worked in an efficiently spaced corner with just the right amount of coal burning nearby to keep him from freezing to death—which would have been quite selfish of him really. Unlike the following incredible deal, brought to you by Smokywood Pastures: your first stop for fine Winter Veil foods and drink! 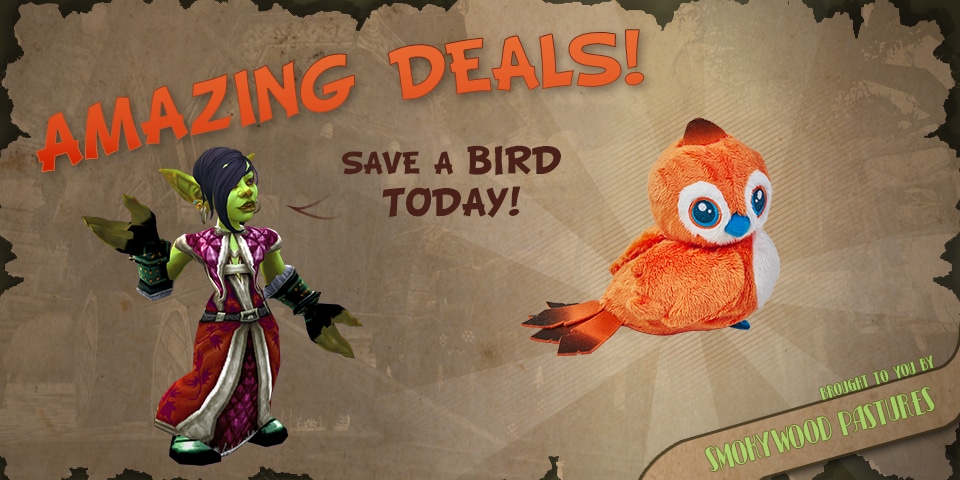 You’ve found Pepe! Now go buy him for yourself or a friend or a neighbor or just to have on hand to give out as party favors. You’ll definitely need more than one for that. Maybe five—five is good! Why, look at those cute little clippy feet and that rotating head. He’s so soft, so fluffy, so cute . . . and he could be yours! Now! Go! Er, wait! Do it after the story.

Scrounge had a nephew named Ted—a jolly fellow who wasn't bad with money, though he wasn't exactly rolling in it either. Ted showed up in Scrounge's office, interrupting him just as he was about to add some really wicked numbers together—we're talking six figures here.

"How can you be so happy about it?" Scrounge scoffed. "You don't even have enough gold to buy everything from the Smokywood Pastures Vendor."

"I'll be able to buy some things, uncle. I've already been eyeing the Honeyed Holiday Ham for my party—which I'm here to invite you to!"

"Bah, humbug! I'm not attending a party unless you have Graccu's Homemade Meat Pies, too. And Steamwheedle Fizzy Spirits."

"Well, we'll leave the light on for you anyway. We'd still love to have you visit."

And with that, Ted left, trying not to break down in tears after Scrounge's perfectly accurate assessment of how dreadful his party would be without the complete collection of Smokywood Pastures' wonderful products.

Then, to make matters worse: Bob dared to speak up and ask for time off for Winter Veil! Which is, of course, ridiculous, because the Smokywood Pastures staff is available 24 hours a day to supply delicious delights such as the scrumptiously meaty Spicy Beefstick!

Despite these outrages, Scrounge ended his day on a high note. He had foreclosed on a pair of gnomes who were a week overdue on their engineering loan and had increased his coffers by another 500 thousand gold—pretty good, all things considered. He closed up the shop and made the journey home to consume a Smokywood Pastures Sampler – a ritual from his less undead years – prior to bed.

But before he could get some much deserved shut-eye, his plans were interrupted by the appearance of his old partner "The Claw" Yardley—which, as you might recall, was quite unexpected because he was quite dead. Yardley glowed like a visitor returning from the Sludge Fens. He clacked his jaws and claws, forcing Scrounge to put a pillow over his head to drown out the racket.

"Scrooooooounge," his old partner said. Probably. It's hard to tell with him, really. 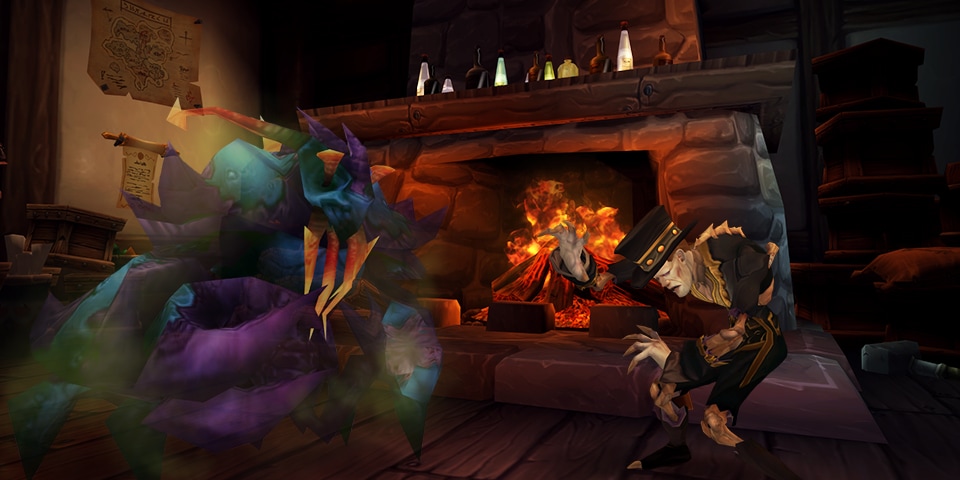 At first, Scrounge tried to blame this ghastly vision on a bit of bad Graccu's Mince Meat Fruitcake–which Smokywood Pastures assures you would be completely impossible, as we only use the finest artificial ingredients and flavorings—but he couldn't shake the hallucination.

"You'll be haunted by three spirits this night!" howled Yardley.

"That sounds expensive," said Scrounge. "And whatever for?"

"You have not done enough for your fellow people of Azeroth! The gold you've accumulated is worth nothing if you don't help the less fortunate buy all there is to be bought from Smokywood Pastures' mouth-watering catalog! Expect the first visit Soon™!"

Then as quickly as he had appeared, Yardley was gone, and Scrounge was left wondering why he was being plagued by a commercial ghost when he'd paid the monthly fee for ad-free hauntings.

With thoughts of a complaint letter forming in his head, he lay down to sleep, ready to put the whole horrid experience behind him.

Join us again on Friday, December 18 when Smokywood Pastures presents Part 2 of A Winter Veil Carol!