Welcome to our World of Warcraft: Legion class preview series. In this entry, we’re exploring the Warrior—to find out what’s in store for a different class, check out the overview.

We continue our early look at class and specialization design with the Warrior. In these blogs, we’ll be exploring class identity, discussing Legion’s new designs, and presenting core combat abilities for each specialization—laying the foundation upon which talents and Artifacts will build further. With that in mind, let’s delve into what it means to be a Warrior in World of Warcraft.

Warriors are the quintessential fearless fighters on the battlefield, and their pure martial prowess inspires courage in allies and despair in enemies. Experts in all manner of melee weaponry and possessing incredible physical strength and skill, Warriors are perfectly suited to serve as frontline combatants and battlefield commanders.

Warriors are thematically informed by our own history, dating back to ancient clashes when close-quarters, shield-and-sword combat was the backbone of battlefield strategy. Warriors in WoW are steeped in this tradition, with each specialization filling distinct niches.

One notable goal we have for Warriors in Legion is to significantly expand their customizability through talents, especially for Arms and Fury. If the below core abilities seem sparse, it’s to leave room for more from talents than ever before. Both specs now have five rows of core throughput talents (mostly different between Arms and Fury, too), with a strong mix of active rotational abilities, passives, procs, cooldowns, and other interesting effects. You’ll find old favorites like Overpower, Heroic Strike, and Opportunity Strikes, returning classics like Avatar, Dragon Roar, and Storm Bolt, along with a host of brand new talents. We look forward to seeing the combinations that you put together. 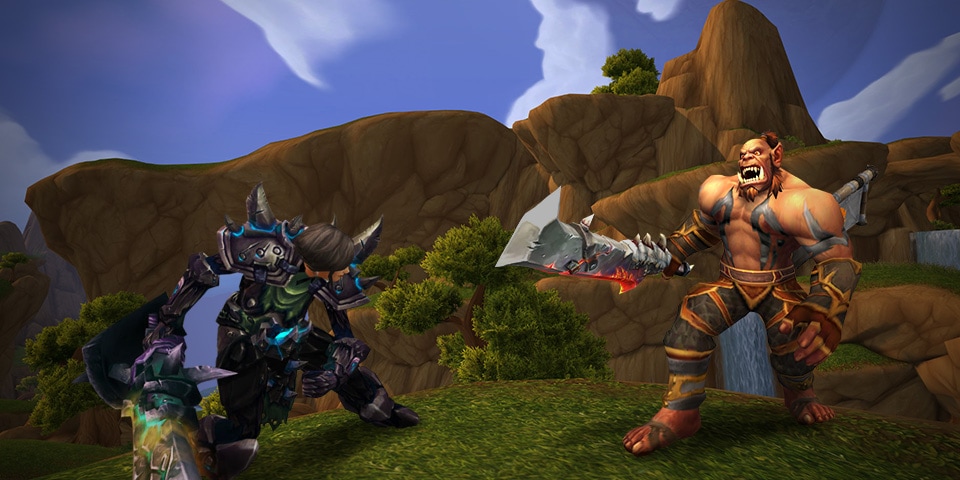 Across culture and kingdom, men and women who demonstrate great physical aptitude are transformed into mighty warriors through tests of strength, endurance, and fighting capability. Their friendships are forged not in the classroom, tavern, or workshop, but in the dueling pits and on the arena floor. As a childhood of sparring defines a warrior’s destiny, so too does one’s choice of weapon determine their role on the battlefield. Arms warriors gravitate toward two-handed weapons instinctively. It’s more than a matter of preference—it speaks to the character of the wielder. Arms warriors are patient in a fight, waiting to capitalize on moments when an opponent is left exposed. Two-handed weapons allow them to deliver devastating, overpowering blows, fully exploiting their enemies’ weaknesses.

"Arms warriors are patient in a fight, waiting to capitalize on moments when an opponent is left exposed."

The defining character traits of Arms Warriors already mesh well with their gameplay, but there’s room for more flavor. In Legion we’ve opened up a wider variety of potential gameplay styles based on your talent choices, as discussed above. We also replaced their Mastery with Colossal Might, which increases the effectiveness of Colossus Smash, playing into their theme more directly. As before, Arms Warrior Rage generation comes from auto-attacks.

Here’s a basic look at the core combat abilities for Arms Warriors:

Additionally, to give you an idea of how some talents may build upon this, here’s an example of one of their Arms-specific talents: 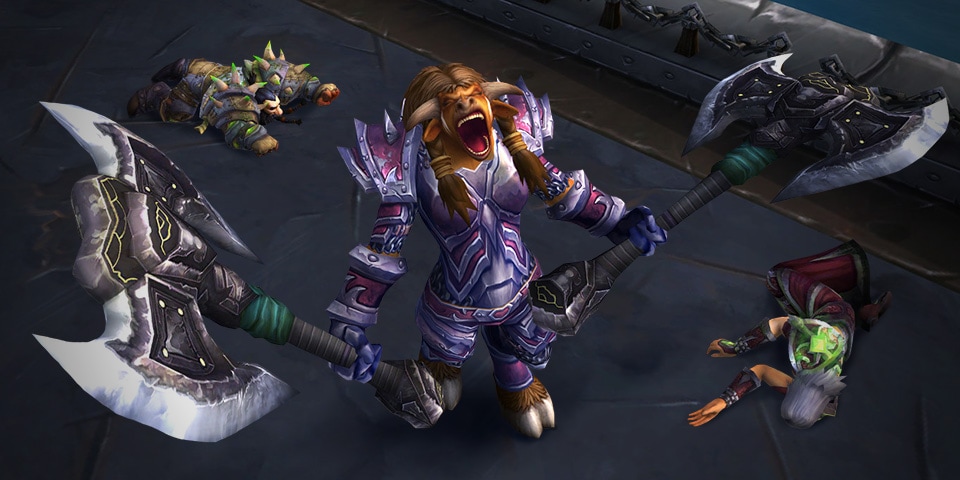 On the battlefield and in the arena, the most feared combatants are often the furious berserkers who lust for battle and thirst for blood. Through a lifetime of training and sparring, these merciless warriors have become masters of carnage—often wielding a weapon in each hand to maximize the destruction. Even without the protection of a shield, the fury warrior leaves little opportunity for an opponent to strike without suffering grievous wounds in return—delivered in a whirlwind of blades that dooms anyone its wake. Brute force becomes a breathtaking display when fury warriors relentlessly dive into the fray.

Fury is a thematically grandiose take on the classic warrior archetype, and in Legion we want the gameplay to convey this better. To help deliver on the fantasy of a relentless death-dealer, we’ve bolstered their gameplay around quickly building Rage and then going wild with Rampage. In particular, Enrage is now considerably more powerful, doubling your attack speed (and thus Rage generation, since the majority of Rage is still generated by auto-attacks), along with increasing damage based on Mastery. Similar to Arms, a multitude of talent options will expand your combat abilities in a wide variety of ways.

Here’s a basic look at the core combat abilities for Fury Warriors:

Additionally, to give you an idea of how some talents may build upon this, here’s an example of one of their Fury-specific talents: 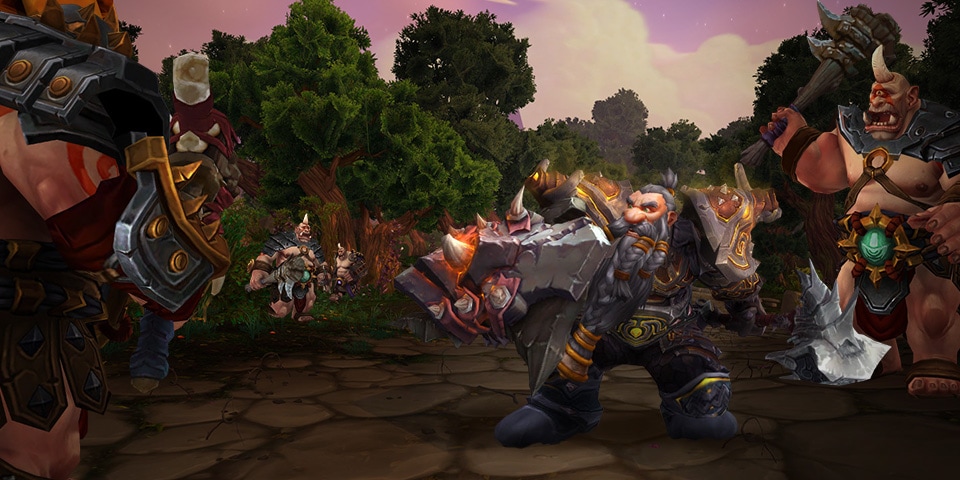 Like their counterparts, protection warriors are virtually bred for physical dominance, having been raised in the art of close-quarters combat—but their measured approach to battle is what distinguishes them from their comrades-in-arms. They demonstrate an uncanny knack for blade and shield, nullifying an opponent’s advances and creating opportunities for counterattacks. For the protection warrior, being the toughest soldier on the front means nothing if allies are left vulnerable to the enemy’s attack. Stalwart defenders are integral to the success of any military campaign—the protection warrior seeks to be an unbreakable wall.

"For the protection warrior, being the toughest soldier on the front means nothing if allies are left vulnerable to the enemy’s attack."

Protection gameplay ties strongly to Warrior lore and exemplifies the very foundation of the tank role in the game, so we’re primarily focused on fine-tuning their mechanics. Shield Block and Shield Barrier in particular often created a trap choice for players. We’ve replaced Shield Barrier with a new ability, Ignore Pain, which massively reduces damage taken (up to a cap based on maximum health) and functions as your primary defensive Rage-spender. It doesn’t compete as much with Shield Block, and thus provides you with distinct tools in your arsenal to apply to different situations. In terms of Rage, Protection Warriors now primarily generate Rage through taking damage, supplemented by a baseline Rage income from ability usage. This plays well with Ignore Pain as their primary Rage-spender; it’s most useful when you’re taking a lot of damage, which is also when you’ll have a lot of Rage to use on it.

Here’s a basic look at the core combat abilities for Protection Warriors:

Additionally, to give you an idea of how some talents may build upon this, here’s an example of one of their Protection-specific talents: 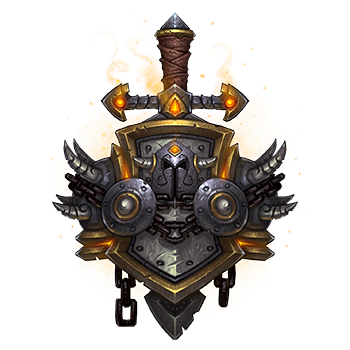 We hope you’ve enjoyed this early preview of our approach to Warrior class and specialization design in World of Warcraft: Legion. We’ll continue our series later today with a look at Monks and Druids.