Europe’s best 3v3 arena teams will be showing off their skills at one of the year’s biggest Blizzard eSports events this fall. The 2015 European Road to BlizzCon will be making its final stop at the 02 Arena in Prague, Czech Republic, where the World of Warcraft European Championship will take place October 3 and 4. 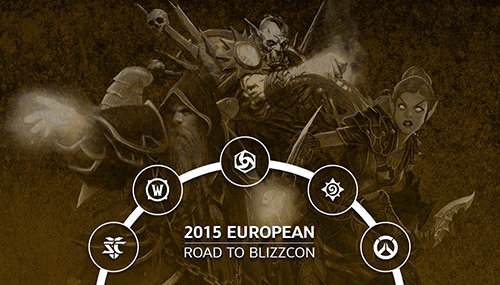 There will be plenty to play for, as participants battle it out for a share of $100,000 USD in prize money. And that’s not all; the top three arena teams at the World of Warcraft European Championship will also earn the chance to compete against the best gamers from the rest of the globe in the World Championship at BlizzCon in November.

In addition to the epic World of Warcraft eSports action, the event will feature the European Championships for Hearthstone and Heroes of the Storm. It’s sure to be an awesome weekend, and there will be lots of entertainment in store for those who attend in person. Visitors will be able to go hands-on with Blizzard’s upcoming team-based shooter, Overwatch, participate in cosplay activities and quizzes, and more. StarCraft II fans at the event are also in for a treat, as some of Europe’s top players throw down in Legacy of the Void show matches.

More information about tickets to the event will be announced soon. If you can’t make it to Prague, you’ll still be able to follow the action via online streams—we’ll have details on how and where you can watch in the coming weeks.

You can learn more about the World of Warcraft Arena World Championship on the official game website.

You can find the full press release here.