In our latest Warlords of Draenor zone preview, we turn our gaze upward to the beautiful Spires of Arak. Here, the winged arakkoa plot atop their high perches, well out of the reach of the brutal Shattered Hand orcs and the cursed wingless outcasts below.

Located in the southernmost part of Draenor, the Spires of Arak is a zone of soaring heights and shadow-drenched crags—but as with much of the planet, the beauty of this place hides something sinister. Game Designer Don Adams and Associate Quest Designer Johnny Cash fill us in on what to expect.

What awaits players among the Spires of Arak?

Don Adams: First of all, we love the arakkoa, and we knew players would be excited to see them again. The Spires of Arak is their home territory, so it felt like the right place to really dive in and explore their culture. We already teased the flying arakkoa at BlizzCon, but players might be surprised to find the familiar cursed arakkoa from The Burning Crusade there too, only with a fancy new model. We felt it was important to portray both sides of the arakkoa, and their duality gave us some interesting themes to draw on throughout the zone. 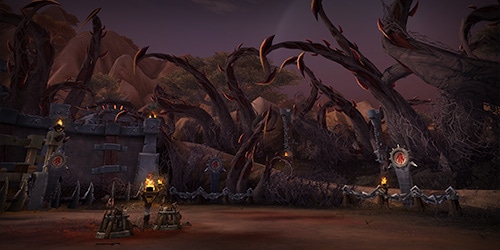 In The Burning Crusade, the arakkoa of Skettis had pretty much fallen entirely into evil, but in Warlords of Draenor we see them at a crossroads. They’re outcasts, hated and oppressed by the flying arakkoa who are torching their villages with an enormous beam weapon fixed atop Skyreach. To make matters worse, the Shattered Hand orcs have begun expanding into the region, killing anyone in their path. These arakkoa outcasts are caught between several enemies, and they really have nobody on their side before you show up.

Over the course of the zone, you’re helping this shady resistance group of cursed arakkoa to make their final stand. You’re learning about the curse they bear, the ancient gods of their land, and the very real threat posed by the Adherents of Rukhmar, the ruling caste of zealous arakkoa in Skyreach. Your adventure leads to two climactic events in the zone: one involving the plight of the outcasts against the flying arakkoa, and another focusing on the Shattered Hand fortress of Bladefist Hold.

Don Adams: You first enter the zone through a mountain pass that shows off some of the harsher elements of the landscape. Boulders are suspended overhead by huge thorny vines reaching out from the mountainside. As you progress down the path, arakkoa refugees push past you in a mass exodus from Skettis. You reach a dramatic vista to see Skyreach looming high above a forest canopy stretching out into the horizon.

Skyreach and its satellite spires maintain an imposing presence throughout the entire zone. You can look up and see them from pretty much anywhere—a constant reminder of the threat looming overhead. 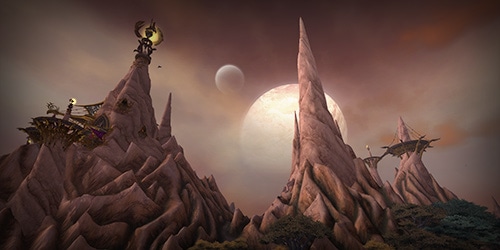 Overall, the vibe in the zone is dire and dark, with hints of light scattered throughout. You are helping these underdogs, and they’re extremely shady and creepy, but you can sense some potential within them. Hopefully players will connect with the cursed arakkoa and forgive them for the whole “monstrous kaliri” thing back in Terokkar.

What are some of your favorite locations in the zone?

Don Adams: You can get a great sense of the look and feel of the Spires of Arak from the Artcraft post detailing the zone’s level design and environment art. The forested regions are dark and mysterious, while the sun-bathed coastal plains are blanketed in brilliant wildflowers. There are contrasting visuals throughout the zone, and yet somehow it all feels tied together.

One of my favorite areas has to be Skettis, with its narrow alleys that evoke the feeling of a bustling bazaar; the wild, uprooted terrain; and precarious walls. We wanted to show that a landslide had swept through the city, and you can actually follow the wash all the way down the mountain to find more ruined pieces settled in the ponds below. Skettis is such a great intro to the zone, offering a straight-on view of the glorious Skyreach from the dilapidated slums full of squatting outcasts.

I also absolutely fell in love with the Howling Crag, which is a bonus objective area on the northeastern side of the zone. The canyons, caves, and land bridges crisscrossing through the area create this very cool vertical element with several tiers of gameplay space. The place really feels hidden, and since we don’t explicitly send you there for quests, you get to discover and explore it on your own.

One last area I’d like to call out is Veil Akraz, one of the outcast villages blasted by the Skyreach beam weapon. It’s such a great display of the destructive power in the hands—talons?—of the Adherents of Rukhmar. You really get the sense that this was an idyllic little outcast village, and now it’s an inferno with a scar of glassed earth running through the center.

What outposts will players be able to build in the Spires of Arak, and how do they impact the Garrison?

Johnny Cash: Alliance commanders, your Garrison forces have established Southport on the western coast as your home away from home in the Spires of Arak. Horde, your forces have erected Axefall not far inland. Heroes of both factions, you’ll quickly find that your outpost is struggling to survive. 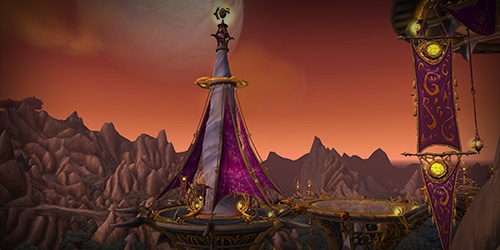 As you quest through the Spires of Arak, you’ll be presented with the choice to construct an Inn to help you house more soldiers and supplies or a Trading Post to establish trade agreements with friendly locals. Which building you choose to construct also leads to a unique quest line.

Based on your choice, you’ll receive a powerful ability usable within the Spires of Arak. The Inn lets you hearth to your outpost on a very short cooldown and also gives you the ability to gain rested experience anywhere in the zone. The Trading Post grants you the ability to call in a smuggling run, which lets you purchase rare and powerful goods unavailable elsewhere—you’ll find these very helpful as you battle the Adherents of Rukhmar and the Shattered Hand.

To the south of your outpost, Rivett Clutchpop has set off with the Steamwheedle Draenor Expedition on a daring drilling venture. However, something has gone terribly wrong, and you’re the only one who can help. After rescuing Rivett and his crew, you’ll receive blueprints to construct a Salvage Yard at your Garrison. Your Salvage Yard will offer you a daily selection of, well, salvage. Sometimes you’ll get vendor fodder, but there’s always a chance your hardworking salvage crew will find something truly tantalizing.

The zone has a little something for everyone, and there are tons of other surprises waiting as you brave its formidable terrain.