The Chronicles of Community: The Skull, the Fansite and the Loot Closet

2012 was a busy year for the community team. There were many exciting challenges to overcome and evolving projects to wrench by the horns, and in these final days we’re preparing ourselves for the road that lay ahead (assuming the road still exists after tomorrow). As we began to calculate the initiatives we have lined up for next year and assess the environmental confines of our department here at Blizzard headquarters, a single concept became illuminated with a blinding simplicity: We need more meeting rooms!

It wasn’t quite clear what he was getting at, but then, upon a soothing voice from beyond [the cube wall], a brilliant question floated: “What about raiding the Closet space?” 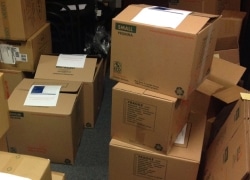 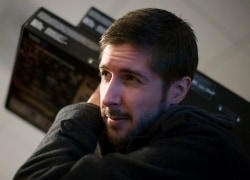 The Closet, or There and Back Again

With a door that lets people in and out, but never seems to open, the community team’s Closet inhabits a space beyond our plane of existence. Only through the recitation of recently discovered incantations etched on Excel spreadsheets, and oaths forged in black Sharpie, have we, at last, managed to attune ourselves to this dungeon. And lo, the artifacts we found were plentiful, entombed in a series of cardboard coffins on musty shelves that stretched far and wide. These items of yore, we realized, were the perfect possessions to part with in the spirit of giving for the holidays!

We’ve catalogued the spoils of our intractable war with the dust mites dwelling in our mystical Closet, and, at the expense of a few hundred carrier pigeons, we tossed the riches to a number of worthy allies in the community. Many of these treasures are of a most rare quality and cannot be found anywhere anymore. (When was the last time you saw a signed standard edition copy of Wrath of the Lich King?) 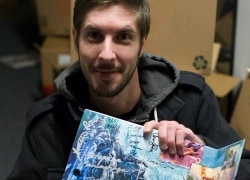 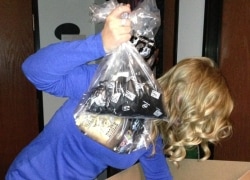 Pop Quiz: From what year is that BlizzCon bag Lylirra's grasping?

This sweet loot has now been divvied up amongst many different sites, and we’re letting them set the terms for how and when it’s all given away. Below we reveal the sites that received packages from us, as well as what loot we sent out . . . but you’ll have to be sedulous in your pursuit if you want to find out when and where which items will appear! We have full faith in your sedulity.

*These copies can only be claimed with North American game licenses. 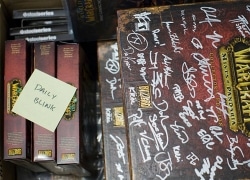 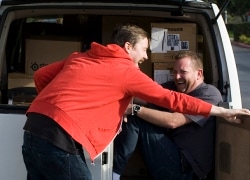 Bashiok decides The Daily Blink gets to take the perky pug home. 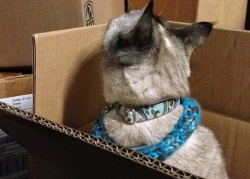 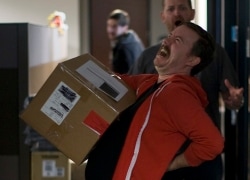 And other things happened.

Good luck to everyone who participates in the quest for giveaways. We now have a room ready for retrofitting with meeting materials, and for that we thank you.

P.S. Here’s a picture of my cat and me. BFFs for nearly fifteen years.