On the eve of the release of the biggest expansion in the history of World of Warcraft, I took a few moments to sit down with Blizzard Lead Content Designer Cory Stockton to talk about Pet Battles.

Q: Before we get too far into the depths of this system, let’s elaborate on the basics. What are Pet Battles? How do they work?

Cory Stockton:  Simply put, the Pet Battles system is an extensive mini-game for World of Warcraft. We’ve always wanted to bring mini-games to WoW, but we never found one before this one that felt like it had enough depth, and this was both a good fit and was worth doing.

It’s intended to be something you do in your off-time. It doesn’t reward any player power, but it has many intrinsic rewards such as achievements and pets, and it’s based on a turn-based strategy game that you’re going to be able to play with NPCs and other players. It’s a system that gives purpose to your pet collection, and makes collecting many more pets a fun endeavor.

Even though it’s an optional part of the game, I hope everyone at least tries it out.  We’ve generated a number of new quest lines that guide you through everything about Pet Battles, and it’s got a ton of customization, including the ability to name your pets. There are over 100 new achievements in the game just for Pet Battles. 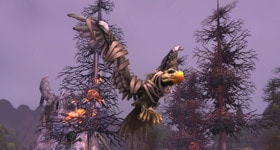 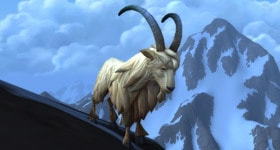 Q: As a player logging into Mists of Pandaria for the first time at level 85, what do I want to look for?

CS: The Pet Battles system progresses as the zones do, so you’ll go to Stormwind or Orgrimmar and talk to a Pet Battle NPC, who will get you started with your skill, a starter pet, and one battle slot. You’ll then follow a quest flow that will ultimately go with you to Pandaria and through the zones there as you level up to 90.

Q: As a brand new player just getting into World of Warcraft for the very first time, what can I expect?

CS: For one thing, the 100g training cost is going to make it difficult for a new player to get caught up in Pet Battles super-early, and that’s by design, because everyone should learn how to play World of Warcraft first. Having said that, a new alt that can get 100g from another character can start the Pet Battle system at level 5.

From there, the system grows with you if you keep up with it, much like professions do. 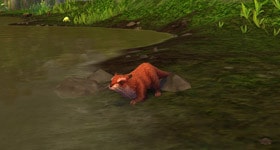 Q: Is there going to be a noticeable difference in the experience for players earning Pet Battles levels and finding new pets on PvP realms, as opposed to normal realms?

CS: You’re definitely more vulnerable to attack while doing Pet Battles on a PvP realm, but we’ve accounted for that. If you’re in the Pet Battles UI when an enemy player hits you, you get a shield that absorbs damage for three seconds. You have time to come out of the Pet Battle and take care of business with the other player, and we respawn your pet for you, so you don’t lose it. On PvP realms, we made sure that you can get attacked during Pet Battles, because we didn’t want the system to be an escape from that vulnerability. 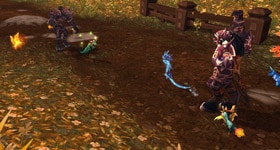 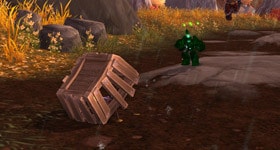 Q: A lot of players are going to be coming into this system fresh, having not beta tested it, and may know it primarily by how Blizzard described it six months ago. From a design standpoint, what has changed for the Pet Battles system during the final stretch of the last few months?

CS: We realized that using and mastering the turn-based-strategy-game part of the system wasn’t what players were spending much time and effort on. Rather, players were putting the focus of the system on pet collection and customization. So we shifted toward pet collection and customization late in the design process, and we put a lot of time into the design of quests that guide you through Pet Battles. The system now gives you goals, and with a lot more NPCs to battle, it almost brings a feeling of “boss fights” to Pet Battles.

You’ll find yourself facing an NPC opponent who has all flying pets, for instance, and you’ll have to go find pets that are strong against flying pets in order to get past him. That’s part of a chain of encounters that culminates in unlocking a series of daily quests, and those daily quests reward you with things like XP and chances at hidden pets.

We also changed the experience of fighting in the wild from one where you always only fought one wild pet. You now often fight two or three wild pets. That raised the difficulty of the entire system for the better. I think it’s going to be rewarding to obtain pets you’ve been trying to collect. 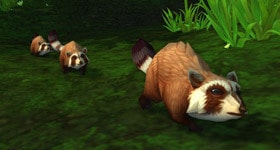 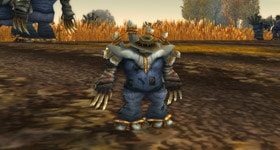 Q: When a player is killed by an in-game enemy, the familiar ghost and resurrection sequence follows. What happens to battle pets that are knocked out in battle, and what do players have to do for their pets at that point?

CS: When you learn Battle Pet training you get a spell in your Pet Journal called Revive Battle Pets that will heal and revive all of the pets in your journal on an 8 minute cooldown. You can also talk to any Stable Master and get your pets healed and revived for a small fee. Also, players can acquire Battle Pet Bandages. These are single-use heals that can help fill in those cooldown gaps. 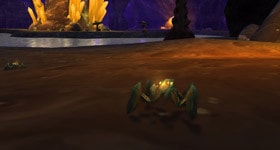 Q: As a player logging into Mists of Pandaria who already has a stable of companion pets that I love, am I going to find ways to make those into the best pets to battle with, or should I expect them to take a backseat to new pets that I’m going to acquire in the weeks to come?

CS: That’s a really important factor to us, and we’re working on it. I don’t think we’re quite ready to disclose all of the details, but I will say this: we’re tracking several additions to the system in future patches, and one of those will be a way to make your favorite little buddy a lot more powerful.

Q: Final question! What’s going to be the pet that you will personally pursue and prize the most?

CS: I have two words for you: