Every year, the druids of Moonglade hold a celebration of their city's great triumph over an ancient evil. During the Lunar Festival, citizens of Azeroth have the opportunity to honor their elders by celebrating their sage wisdom, sharing in magnificent feasts, and (of course) putting on a fireworks display!

The Lunar Festival is a time of celebration for the peoples of Azeroth. They gather to acknowledge their triumph of ages ago, when an alliance of Azerothian races (Night Elves, Tauren, and the proto-dwarven Earthen) defeated the Burning Legion. At the beginning of each year, elders of generations past manifest around the world to impart their wisdom upon all who listen. Should you encounter these venerable spirits in your travels and take the time to heed their wisdom, they may even pass along tokens of their gratitude — Coins of Ancestry, the lessons of a past age in physical form. Gather enough Coins of Ancestry and the Cenarion Circle will open their stores of celebratory garb, fireworks, trinkets, and recipes!

The Cenarion Circle has good cause to celebrate, for the Lunar Festival marks the return of many Ancients that fell in battles past: Goldrinn, Malorne, Aviana, and Cenarius himself. But this celebration is darkened by the eternal torment of one of their own — Omen, a wolf Ancient blessed by the moon goddess Elune, has risen from the depths of Moonglade’s lake. Though Omen was once as noble and proud as any Ancient, he was driven mad by the Burning Legion’s tainted magics during the War of the Ancients. Omen’s immortality means that he is forever cursed to return in his maddened state at the advent of each new year: he has grown further in power, a challenge for even heroes of maximum level. Heroes must make haste to ease this tormented Ancient’s suffering, in the hopes that perhaps next year he will return with a clearer mind.

Coin of Ancestry
Coins of Ancestry are used to purchase festival clothing and other special items. You can collect them by completing quests, including the daily quests that are part of the festival.

Seasonal Boss: Omen
The great wolf Omen was once a hero of this world. An embodiment of strength and fortune, Omen fought beside the heroes of the War of the Ancients until he succumbed to demonic magics. Turning against his allies, he raged across Azeroth, leaving death and terror in his wake. Omen was finally defeated in Moonglade, and he now sleeps among the silt of Lake Elune'ara. But each year, at the beginning of the festival, he stirs...

Elders
During the Lunar Festival, you will have the opportunity to honor your elders; in doing so, you’ll also honor their culture and people. Those who show their elders respect will be rewarded with Coins of Ancestry and Lucky Red Envelopes.

Fireworks
The innovative and artistic engineers of Undermine have been slaving away since their display of pyrotechnics in January. Their latest and greatest - not to mention highly dangerous - creations will be on display in the cities of the world every hour after sunset. Keep your eyes to the skies, and be sure to stick around for the finale!

Revelers
Many soldiers have come home from abroad to engage in the festivities. Share in the merriment and dance with the revelers, or, if you're so inclined, blow a kiss to one that catches your eye. It's all in fun; they appreciate the attention!

Festival Outfits
A selection of unique clothing is available to help you join in the festivities. Such outfits have been worn in times past during the Lunar Festival, and each is hand-crafted with only the finest fabrics and other quality components.

Merchants & Vendors
These sellers will exchange food, festive clothes, pets, and more for your Coins of Ancestry. 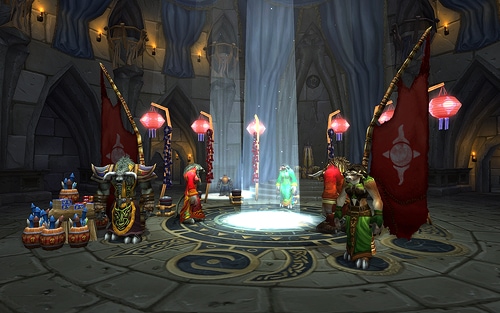 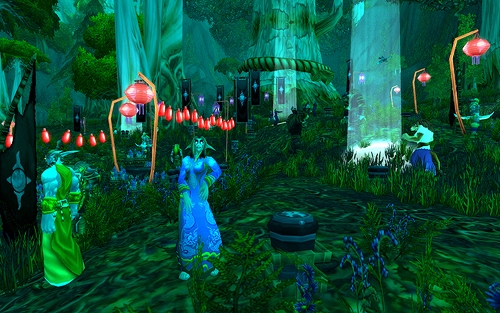 Achievements
The Lunar Festival currently offers a total of 190 achievement points, split over 16 achievements and 1 meta-achievement.
Please note that all objectives for Achievements between the Horde and Alliance are relatively the same though have some minor differences. 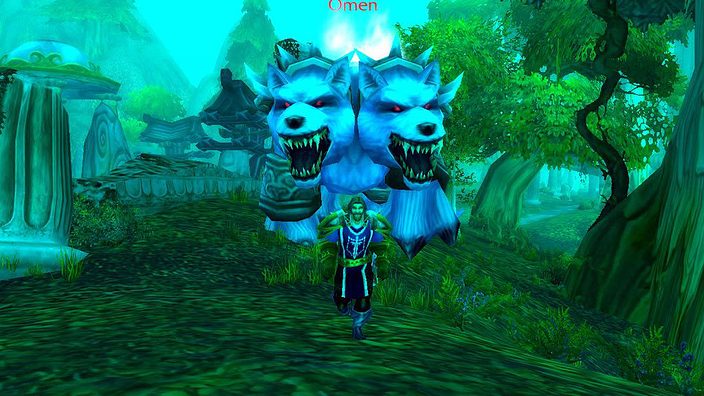