Hallow’s End is Near!

Observed by both the Horde and the Alliance, Hallow's End is a celebration of the break between the Forsaken and the Scourge. Many tricks and treats await adventurers seeking holiday fun, including defeating the Headless Horseman, visiting inns and cities for fun items such as masks and costumes, and eating way too much candy in one sitting. Read below for more things to do during spooky season on Azeroth! 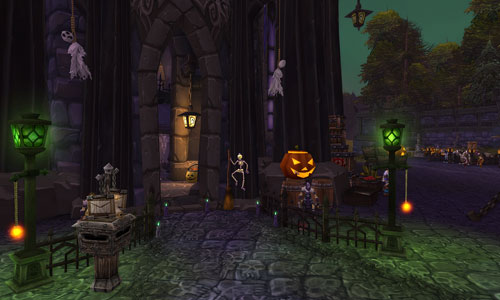 Once again Hallow’s End approaches, promising tricks, treats, and triumphs for boys and ghouls (heh) all across Azeroth! This year, starting on October 18th, you’ll find a special Hallow’s End Wickerman set up and ready to burn in Stormwind and near the Undercity within the Ruins of Lordaeron. Every four hours, Genn Greymane and Lady Sylvanas will arrive to light each faction’s respective Wickerman in celebration of Hallow’s End. Of course, it wouldn’t be Hallow’s End without a little mischief.

Tricky Treat
Tricky Treats are the currency used to purchase candies and other special rewards. You can collect them by completing quests, and opening the pumpkins found inside inns throughout the world.

Seasonal Boss: Headless Horseman
Use the Dungeon Finder to participate in a high-level encounter against the Headless Horseman (your character must be at least level 89), granting a Loot-Filled Pumpkin containing special holiday loot as a daily reward.

Shade of the Horseman Adventurers who find themselves in Goldshire, Azure Watch, Kharanos, Brill, Razor Hill, or Silvermoon City may stumble upon the Headless Horseman as he flies over the town, inciting terror in the populace and setting their homes and buildings ablaze! Are you brave enough to help douse the flames and bring down the headless horror?

Light My Fire
To get into the spirit of the holiday, you can visit the Wickerman celebration just outside the city gates of Undercity and Stormwind to obtain quests. These daily quests range from lighting your faction’s Wickerman (and earning a nice buff for doing so) to travelling to the opposing faction's city and extinguishing their Wickerman!

Stink Bombs
Fly to the opposite faction’s Hallow’s End celebrations and drop a smelly surprise on their heads -- in the form of stink bombs. Naturally, the denizens of those cities won’t take such an outrage lying down, so players can volunteer to help clean up the mess.

Sweets for the Kids
Hallow's End is already the favorite holiday of many children in Azeroth, but, if you want to make the orphans' holiday even more special, you can help them amass a stockpile of candy.

Candy Buckets
Colorful orange candy buckets, a staple of Hallow’s End, can be found in capital cities throughout Azeroth and beyond. Reach in and grab a handful of candy -- which can contain Tricky Treats and more -- but beware! Sometimes you’ll get a trick as well as a treat.

Apple Bobbing
If candy isn't quite your thing, no problem: every inn has a tub filled with water and apples to bob for.

Merchants and Vendors
These professional hoarders will exchange Tricky Treats for candy, masks, wands, pets, a temporary mount and more! 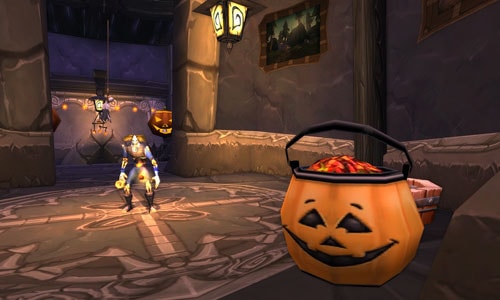 Titles
If you complete eleven Hallow's End Achievements (Trick or Treat!, Out With It, Bring Me The Head of... Oh Wait, The Savior of Hallow's End, That Sparkling Smile, Rotten Hallow, G.N.E.R.D. Rage, Check Your Head, The Masquerade, Sinister Calling, and Tricks and Treats of Azeroth), your character will gain the title ‘the Hallowed’.