The later seasons of Azeroth are marked as a time of change in many cultures. The term "Winter Veil" is said to stem from a supernatural being referred in many cultures to as Greatfather Winter. As he would walk the land late in the seasons, winter itself would be his billowing cloak. In his wake was the blanketing of the land in snow, and thus it is said that Greatfather Winter would cast his wintry veil over the land.

The idea of feasting during this time of year is one that traces its origins to the legend itself. As Greatfather Winter walked Azeroth, it is said he would provide a bounty for those who welcomed his presence.

As such, the idea of feasting during the winter veil would bring together communities as they shared whatever they had. Typically, a single day of merriment and feasting welcomed the change, all in anticipation of the land's renewal. 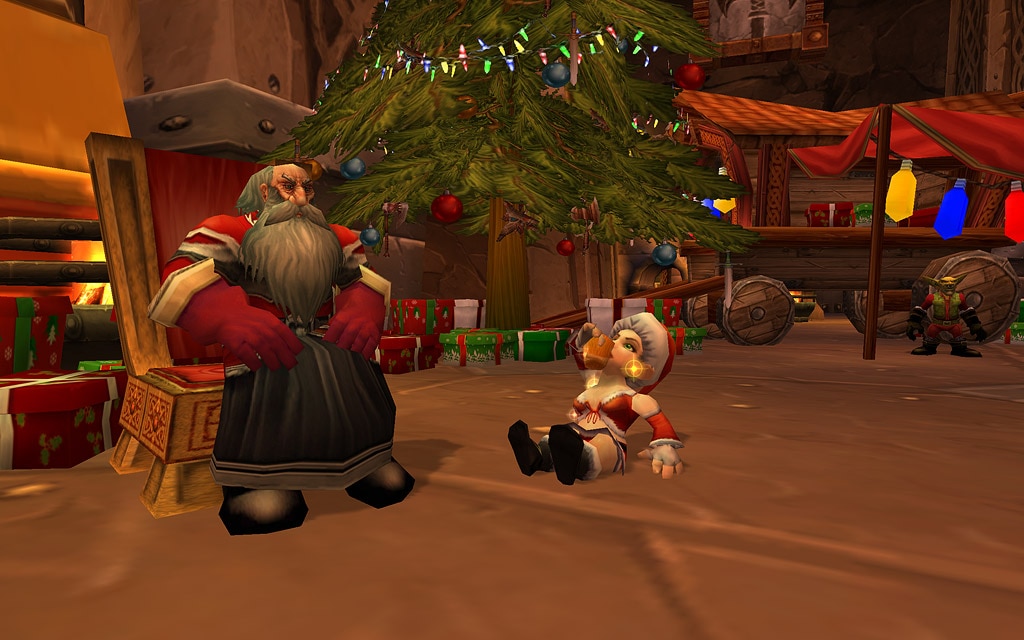 Ho ho hello, um, little child. I'm Greatfather Winter, and I - courtesy of the fine folks of Smokywood Pastures... "Fresh from our farm to your plate, it's Smokywood Pastures wholesome goodness" - would like to wish you a fantastic Feast of Winter Veil.

If you've been good this year, maybe you'll receive treats from Smokywood Pastures as your treat for the Feast of Winter Veil. Huzzah.

Also, be sure to stock up on treats to give those who've been nice this year. Smokywood Pastures has a great selection to choose from. Look for them at a major city near you.


Winter Veil Bosses
The denizens of the dungeons of Northrend are also getting into the holiday spirit, and some dungeon bosses even wear festive Winter Hats just like Greatfather Winter's. Defeat a Winter Veil boss, and the boss' hat is yours!

Greatfather Winter
Greatfather Winter is visiting the great cities of Ironforge and Orgrimmar – courtesy of the fine folks of Smokywood Pastures and he's spreading cheer in celebration for the Feast of Winter Veil. But, all the cheer-spreading is making Greatfather Winter hungry, and he's looking for adventurers to get him his daily fix of milk and cookies.

Revelers
During the Feast of Winter Veil, the innkeepers bring out holiday decorations to provide a festive atmosphere for their patrons. Who knows what might happen if you /kiss a reveler standing near a sprig of mistletoe…

Smokeywood Pastures' Missing Shipment
Smokeywood Pastures needs a few brave adventurers to investigate the disappearance of a shipment of holiday goods. Rumors are the shipment is in the possession of the Abominable Greench, found somewhere in the snowy regions of the Alterac Mountains.

Metzen the Reindeer
Disaster has struck! Metzen the Reindeer has been kidnapped! Metzen is one of Greatfather Winter's eight reindeer - and property of Smokywood Pastures. The Jinglepocket Goblins have received two ransom letters from groups claiming to have Metzen. Concerned adventurers should visit Ironforge or Orgrimmar for more information.

Snowmen
Accompanying Greatfather Winter in his journeys across Azeroth are his loyal troops of snowmen. They can be found wandering around Ironforge and Orgrimmar, bringing with them the chill breath of winter into even the warmest climes.

Gift-Giving
In the quiet, early hours of the 25th of December, the industrious goblins of Smokywood Pastures are already awake. As a much-deserved reward for the noble adventurers throughout Azeroth, these generous harbingers of the holidays deposit gifts underneath the decorated trees in Orgrimmar and Ironforge. Keep a keen eye out for these presents, as they're there for the taking! 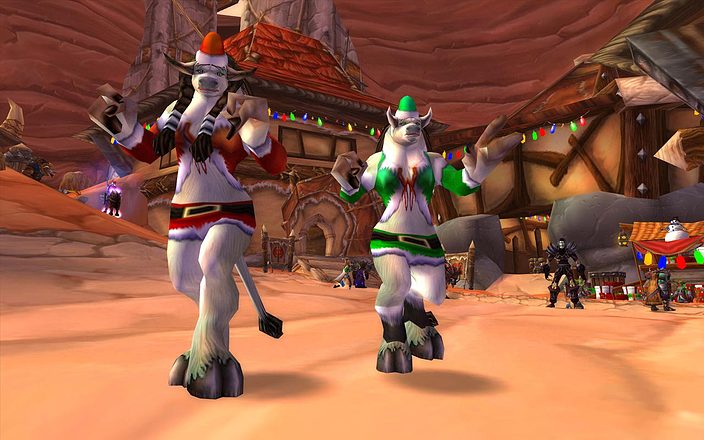 
Seasonal Food & Drinks
Countless delicious meals, beverages and sweets can give you a buff, help your character recover health and mana, or are just delicious! 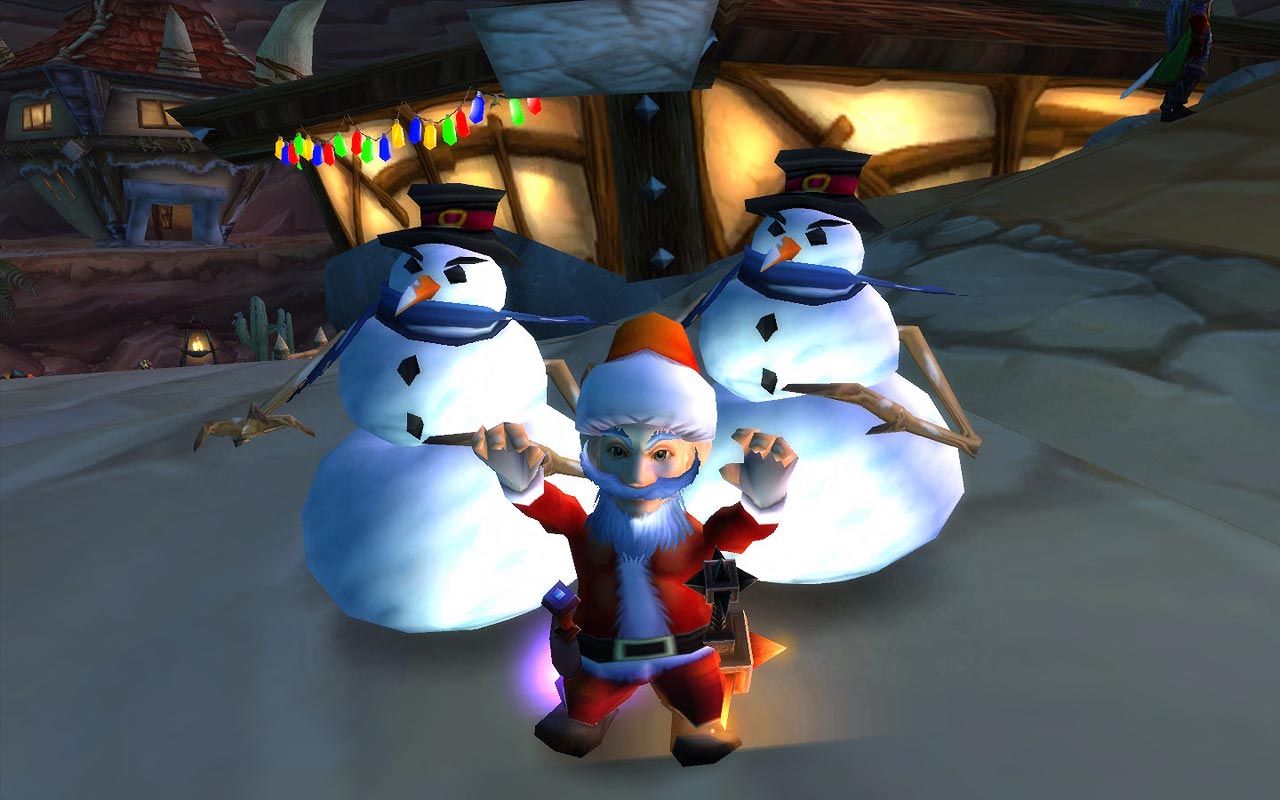 Achievements
Feast of Winter’s Veil currently offers a total of 150 achievement points, split over 14 achievements and 1 meta-achievement.
Please note that all objectives for Achievements between the Horde and Alliance are relatively the same though have some minor differences.

Titles
If you complete eleven of these Achievements for this particular seasonal event (On Metzen!, Scrooge, 'Tis the Season, Let It Snow, The Winter Veil Gourmet, A Frosty Shake, With a Little Helper from My Friends, Fa-la-la-la-Ogri'la, Simply Abominable, Bros. Before Ho Ho Ho's, He Knows If You've Been Naughty), your character will gain this special title “Merrymaker”. 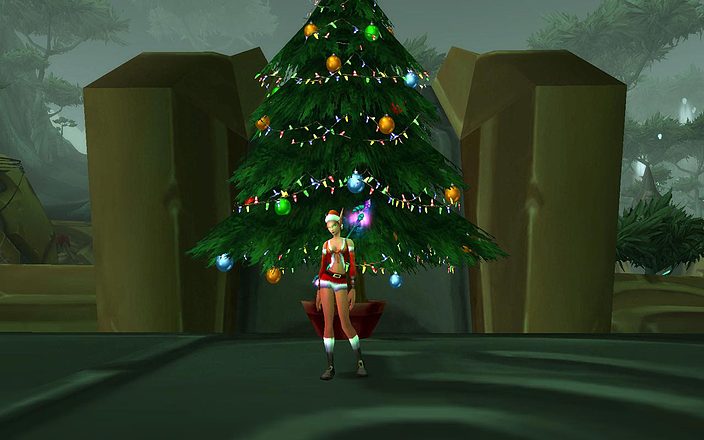