When World of Warcraft players around the world go looking for detailed information about the game, one of the places they most often look is Wowhead.com, a database of pretty much everything in the game. For the last few years, the person most often responsible for all that information has been Site Director Alexis “Perculia” Kusy.

She’s one of the busiest people we know, and Perculia took the time to answer all our questions for this week’s Community Spotlight.

Q: Where did you start with video games?

A: My parents were teachers, so I grew up playing educational floppy disk games on ancient computers the school threw out, like Lemonade Stand and Odell Lake. Besides that, my childhood was pretty strict so I didn’t have access to other games. However, my school was doing tryouts for Where in Time is Carmen San Diego, and I was motivated to sign up because the grand prize was a computer (fitting as the game show was also a computer game). I ended up winning!

The computer didn’t come with as many games as I hoped, but I was entranced by Myst and worked my way exploring through the world, reading all the books, and getting stuck on puzzles.

Q: Where did you go from there?

A: My college roommate introduced me to World of Warcraft. I knew she played, but my knowledge of the game was vague, until one weekend, we were going to go out to a party, but only after she cleared this instance with lots of stairs called Zul’Farrak. I ended up falling asleep during their endless attempts to clear the stairs, and woke up several hours later upset we missed the party. She explained more of the game to me, I was hooked, and she bought World of Warcraft for me that Christmas.

Once I started playing, an event that motivated me to try harder in World of Warcraft was winning the Swift Zulian Tiger shortly after hitting level 60. Not many people on my server had that mount, so everyone inspected me and I felt that I had to really learn how to play and gear my character to look deserving. This led to both an interest in raiding and also collecting mounts!

Q: How did you end up with Wowhead?

A: During Firelands, a friend who worked at Wowhead suggested I volunteer. At the time, I was finishing up a master’s program in Museum Studies and working various research jobs in the arts. I grew hooked because writing for Wowhead required the same high level of research but touched a much larger audience, which was inspiring. I wanted to find a way to be more involved, so I took on more ambitious projects like maintaining the transmog database and my responsibilities increased to where I was managing much of the site in Mists of Pandaria.

I learned first-hand that a staggering amount of work goes into Wowhead behind-the-scenes, but at the time it wasn’t apparent to many players. So I worked on initiatives to reach out to the community and round out the site’s content. We expanded the news with a new front page and in-depth beta coverage in the style of our guides, rounded out our guide section after the early success of holiday and vanity items, and used core tools like the Profiler and modelviewer as the foundation for popular features like the Flying Tool and Dressing Room. Wowhead Weekly -- which airs on twitch.tv/wowhead every Friday at 3:00 p.m. PT -- has been a nice way to interact with the community.

None of this would be possible without the dedicated developer and content team at Wowhead, as well as the countless contributions of our users.

Q: You clearly love playing World of Warcraft. What do you recall most fondly?

A: I have a lot of great memories with my old raid teams -- defeating Sunwell before nerfs as the Expose Armor rogue, achieving Realm First Alone in the Darkness as my first big kill as a raid officer, waiting to ding Realm First! Level 85 Rogue so others in my guild could catch up and achieve it together. It was special to coordinate something so elaborate with dozens of people, and to feel proud that success was purely due to working hard.

Another great memory was my guild pooling gold to surprise me with Perculia's Peculiar Signet in early Mists of Pandaria, and then again in Warlords of Draenor with Kyu-Sy's Tarflame Doomcloak. Both times they made me think they wanted me to log on to answer WoW questions!

Q: How about face-to-face experiences?

A: BlizzCon is the high point of the year, when I get to finally see everyone face-to-face! BlizzCon is especially meaningful because it’s something I’d never expected to attend back as a broke college student, and now so many people look forward to the site’s coverage and party. Last year’s Wowhead party was memorable -- we had a claw machine filled with Blizzard plushies and a gigantic 10th year anniversary cake!

The Twitter community’s reaction to Pepe has also been a bright spot. I started posting silly pictures of the Pepe plush at one point, and then Pepe’s adventures became very popular! People have flooded me with little Pepe gifts, including cute fanart, and a variety of hats ranging from Murloc Pepe to Spring Flower Pepe. I look forward to seeing lots of dressed-up Pepes at BlizzCon 2016.

Q: What do you see in the future?

A: The Blizzard art team is doing an amazing job with Legion, especially in Azsuna and Val’sharah. All of my characters are night elves, and I love 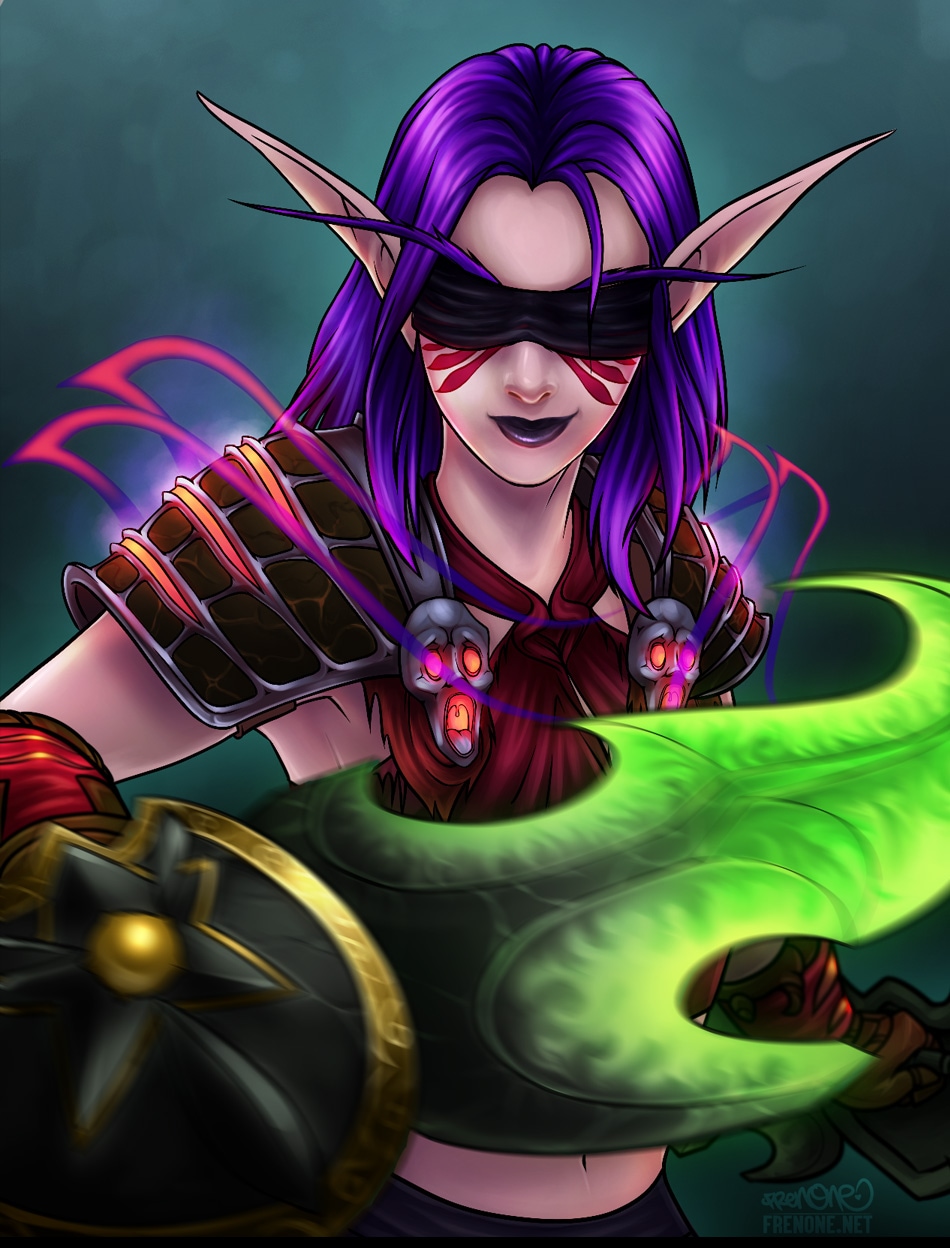 learning more about their lore, especially related to Queen Azshara and the Sundering. With the new dynamic leveling experience, you can pursue any questline you like without feeling like you’re doing zones out of order, which is great as I just want to focus on the elf quests!

I am also excited about the new transmogrification system. Hidden shoulders and more bag space! One of my hobbies outside of World of Warcraft is fashion and I love when I can mix interests.

Q: Do you have anything further you’d like to say to World of Warcraft players?

A: There is a wonderful community of players out there who act helpful and humble. I’ve met close friends through World of Warcraft by taking a chance and reaching out to others. World of Warcraft is a better game if you’re having fun together with friends, creating new memories together.

Our thanks to Perculia for taking the time to help us shine the Community Spotlight on her! For more Perculia online, we encourage you to follow her on Twitter right here.