You know about the cash and the glory, but have you seen the spectacular trophies and medals awarded to the winners of the BlizzCon World Championships? We’re very excited to create and award something worthy of these heroic champions!

Design Process
Our medals and trophies are created by our game development teams, first as ideas and artwork for proposals, then as 3D sculpts. Following that phase, we share the art with a design studio, MANA Studios in Orange County, to begin the physical creation process. We understand how unique our awards need to be in a world with no shortage of epic eSports trophies. 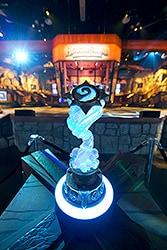 Hearthstone – World Championship
Prize Pool: $250,000 USD
Materials: custom glass, wood, and bronze
Design Process: The Hearthstone team felt that this trophy was a real opportunity to bring to life the charming qualities of the Hearthstone tavern. The team provided a concept that clearly outlined not just the shape and scale of the trophy, but also the quality materials used in its construction. The concept was digitally modeled and 3D printed, the final touches were hand-sculpted, cast and applied, and the materials were ultimately assembled into a trophy appropriate for a champion to lift triumphantly on the BlizzCon stage. 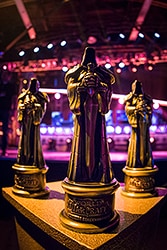 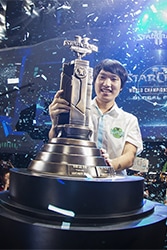 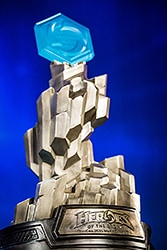